December is decision time at CCW

For the third year the Convention on Conventional Weapons (CCW) met in Geneva to work on autonomous weapon systems. From April 11th to 15th 2016, the informal experts meeting held at the United Nations addressed a wide range of issues and concerns. The meeting was attended by 94 member and observer States to the 1980 Convention on Conventional Weapons. This marked the highest turnout yet reflecting the increasing awareness and growing concern about these future weapons. 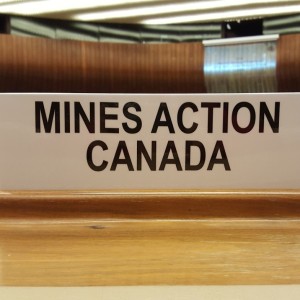 The CCW is a framework treaty that prohibits or restricts certain conventional weapons deemed to be excessively injurious or to have indiscriminate effects. The meeting included members of UN agencies, including the UN Institute for Disarmament Research, and the International Committee of the Red Cross (ICRC). The Campaign to Stop Killer Robots, with a diverse and passionate group of 40 campaigners from 10 countries, was active and provided very substantive input and expert analysis into discussions on issues such as meaningful human control and the weaknesses of Article 36 weapon reviews among other topics.

As a co-founder of the Campaign to Stop Killer Robots, Mines Action Canada (MAC) supports a pre-emptive ban on lethal autonomous weapons systems before they are ever developed or used. MAC was well represented at the meetings and gave statements about the repercussions of allowing such weapons to be developed. Executive Director Paul Hannon’s statement talked about the need to implement a ban on these systems before a humanitarian catastrophe occurs as well as the growing support for a pre-emptive ban. Project Coordinator Erin Hunt’s statement detailed the limitations of weapon reviews for lethal autonomous weapons systems and the importance of prioritizing a ban on these systems. Project Ploughshares, a new Canadian member of the Campaign to Stop Killer Robots, also participated actively.

The common area of concern regarding lethal autonomous weapons systems is the lack of ability to properly target and apply force in a strike. Without human control over key points of identification of targets and approval of a strike, innocent civilians could be inappropriately targeted and killed. It is important to maintain meaningful human control over critical functions of lethal autonomous weapons systems to ensure proper application of international humanitarian law as well as accountability were a target later to be understood as inappropriate. These qualifiers cannot be guaranteed with lethal autonomous weapons and thus threaten international security and stability.

NGOs remain concerned over the lack of concrete action taken on this issue. Strong and substantive statements were made by Mines Action Canada, Nobel Women’s Initiative, Human Rights Watch and others at CCW in April, urging states to establish an open-ended Group of Governmental Experts (GGE). A GGE would see in-depth study into the issues surrounding lethal autonomous weapons and submitting their findings to the UN. A GGE would be the first step in understanding issues of how lethal autonomous weapons systems would comply with international humanitarian law, the effects on regional or global security, create instability and the risk of an arms race. In addition, the GGE would give the CCW time to explore the blurred nature between soldier and weapon that fully autonomous weapon systems present. A short video compiled by the Campaign to Stop Killer Robots at the meeting in April can be seen here and daily updates can be found online for Monday, Tuesday, Wednesday, Thursday and Friday.

The meeting ended with some recommendations for the future and states ‘may decide to establish’ a GGE at the 2016 Fifth Review Conference of the High Contracting Parties to the Convention on Prohibition or Restrictions on the Use of Certain Conventional Weapons in December. In addition, the recommendations state that the GGE should work to identify characteristics of lethal autonomous weapons systems and create a working definition.

Although most interventions supported the formation of a GGE as the next step in this process, the final decision will not be made until the Review Conference in December. While Mines Action Canada is cautiously optimistic that a Group of Governmental Experts will be formalized at the meeting this December, we remain concerned that the pace of these discussions is not keeping up to the speed of technological change. Of course, the specific mandate of the GGE will be all important.

Much work remains over the coming months.

The Campaign to Stop Killer Robots released their report on the activities undertaken at the 3rd meeting of the Convention on Conventional Weapons and can be found here.

A student post by our summer student Miranda Barclay.