On July 7 2017, 122 states adopted a new treaty prohibiting nuclear weapons at the United Nations in New York. The Treaty on the Prohibition of Nuclear Weapons bans the development, possession, stockpiling, transfer, use and threat of use of nuclear weapons while also requiring states to assist victims of nuclear weapons use and testing as well as to remediate affected environments.

This treaty came about after years of work by states and civil society. In the face of disarmament efforts that had been stalled for decades, civil society and like-minded states reframed nuclear disarmament from an arms control question to a humanitarian issue. The humanitarian framing was a key driver in the Humanitarian Initiative that led to the negotiations just as it had been for the processes prohibiting anti-personnel landmines and cluster munitions.

Just as advocates for nuclear disarmament were able to learn from previous campaigns to ban landmines and cluster munitions, future disarmament campaigns can learn many lessons from this process leading up to the Treaty’s adoption. In particular, it can provide a number of important lessons for civil society and states working towards a pre-emptive ban on autonomous weapons systems.

First, the nuclear ban process demonstrated that it is much easier to prohibit weapons before they are used. It took 71 years, 11 months and 1 day to adopt a treaty prohibiting nuclear weapons after their first use in Hiroshima, Japan. In that time, nine other states developed nuclear weapons (South Africa later dismantled its program), nuclear weapons were tested over 1,000 times and the global nuclear arsenal ballooned to over 60,000 before dropping to the current total of approximately 15,000. We also cannot forget that the first United Nations resolution ever agreed to, back in 1946, was in support of nuclear disarmament.  Over the past seven decades, countless hours and dollars have been spent trying to prohibit and eliminate nuclear weapons.

When it comes to autonomous weapons, a similar time frame could result in countless casualties and unimaginable humanitarian harm. Looking back now on what it has taken to get to this place regarding nuclear weapons and how much further there is go, the only logical conclusion is that we should have prohibited nuclear weapons in 1945 – it would have saved many lives and significant amounts of money.

Second, conversations about the humanitarian impact, the legality and morality of weapons are useful even when others want to talk about “hard security” because they open space both for conversations and for other actors. Nuclear disarmament has often been characterized as the ultimate hard security topic – one that has be talked about in “serious” state security and arms control terms. However, the process that led to the nuclear ban treaty framed the conversation around the humanitarian impact of nuclear weapons.

By placing human security at the centre of these discussions, the humanitarian initiative created new space to consider the prohibition of nuclear weapons. All states had a stake in the negotiations because of the trans-border nature of the humanitarian consequences of nuclear weapons.  Whether they were part of a Nuclear Weapons Free Zone or neighbor to a nuclear armed state, all states who participated saw that nuclear weapons were a threat to their citizens. Prioritizing the security of citizens changed the conversation and a similar shift could be expected within the discussion of autonomous weapons systems.

The morality of nuclear weapons also figured heavily in the Humanitarian Initiative. Faith groups especially highlighted the morally unacceptable basis of nuclear deterrence. The moral and ethical issues surrounding autonomous weapons systems have been a topic of conversation at the national and international level from the start and this should continue. As humanity we cannot overlook questions about the morality and ethics of weapons. It is often the moral and ethical arguments that motivate states to disavow weapons that may have some perceived military utility.

Third, being rational and realistic is not exclusive to those focusing on traditional state security. Disarmament advocates and states supporting the nuclear ban treaty had realistic and security focused reasons for pursuing nuclear disarmament and the treaty, however, they were dismissed as being driven by emotions and values not rational thought. People who claim to be “rational” or “realistic” because they are talking about state security are just as emotionally and values driven as those taking a humanitarian approach. Critics of civil society and of the ban treaty process often accused them of being emotionally driven while those supporting the status quo were considered “rational” and “realistic”.   Beyond the gendered narrative constructed by these assertions, the important thing to remember is that even those who are focusing on hard or state security are motivated by values. The values may be different, but that does not preclude that they are emotionally driven.

Fifth, diplomats and governments should listen to scientists. After the development of the first nuclear weapons, scientists from a variety of disciplines appealed to world leaders to “remember your humanity, and forget the rest” and end the threat of use of nuclear weapons. That appeal went unheard and decades later, over 3,000 scientists signed an open letter in support of the 2017 negotiations.  The scientists should have been listened to in the 1940s. Now, we see thousands of AI experts, roboticists, computer scientists and others speaking out and calling for a pre-emptive ban on autonomous weapons systems. Many of these experts do not want to see their work corrupted into harming people. Their concerns are serious and should be treated as such.

Sixth, colonial views still permeate international affairs. For decades the only opinions that seemed to matter about nuclear weapons were those of the five nuclear weapon states (the US, the UK, France, Russia and China) and occasionally their allies. The security concerns of the nuclear armed states were paramount over any concerns by the vast majority of the planet.  Even after the Humanitarian Initiative began to level the playing field or as Costa Rica put it, “democracy has come to nuclear disarmament”, the nuclear armed states still continued to question the validity of other states’ concerns. During informal comments in the United Nations General Assembly’s First Committee in 2016, the United Kingdom’s ambassador stated that the states pressing for a nuclear ban treaty did not have security concerns unlike the states who opposed the negotiations which did. It goes without saying that all states have security concerns.

These colonialist hangovers also had an impact on who were considered acceptable guardians of weapons capable of destroying humanity. Built into the conversations about nuclear weapons is the idea that they are bad for most states to have, but that a select few states can have them without it being a problem. However, as the Humanitarian Initiative has shown there are no safe or responsible hands for nuclear weapons. The risk of another nuclear detonation, intentional or not, is far too high.

Colonialist views can be seen in the assumption that only “we” will have autonomous weapon systems and the reasons “we” might need them are more valid than reasons for opposing them.  In the nuclear ban context, these views were overcome by a humanitarian approach and by meetings which were open to all states and blockable by none. Unlike a number of other United Nations bodies that deal with nuclear disarmament, the 2016 Open Ended Working Group and the 2017 negotiating conference were open to all states as well as international organizations and civil society. These meetings originated in the United Nations General Assembly which provided rules of procedure predicated on equality between all participating states. International efforts to pre-emptively prohibit autonomous weapons systems should aim for similar levels of openness and inclusivity to ensure that all states have a voice on this issue that will affect us all. 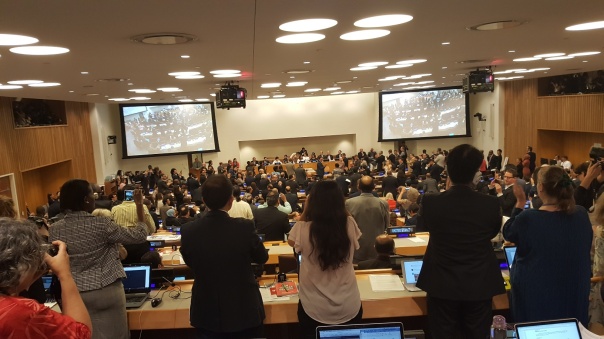 The Humanitarian Initiative and the Treaty on the Prohibition of Nuclear Weapons have provided a number of lessons for campaigners and states seeking to pre-emptively prohibit autonomous weapons systems. More importantly perhaps this process has shown it is possible to create new international law even when some states are strongly opposed to the idea. The power of civil society and like-minded states to create change should not be underestimated.