On August 29, 2018, Mines Action Canada delivered the following statement at the Convention on Conventional Weapons Group of Governmental Experts on Autonomous Weapons Systems

Thank you Mr. Chair. As co-founders of the Campaign to Stop Killer Robots, Mines Action Canada urge states to start negotiating new international law to create a new treaty to ban fully autonomous weapons and retain meaningful human control over the use of force.

As an organization from Canada, which has put a focus on Artificial Intelligence as a driver of our future economy, we see the prohibition of autonomous weapons systems as safeguarding public trust in AI and robotics. 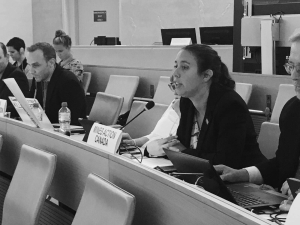 This year’s Canadian trust survey by Proof – a polling and public relations firm – found that that only 39 per cent of Canadians trust that artificial intelligence will contribute positively to the Canadian economy, and even fewer women believe this to be true, at 36 per cent. Also, it found that only 25% of Canadians trust AI companies to do what is best for Canada and Canadians. These levels of public trust will present a problem for the commercial success of AI in the future.

At yesterday’s side event, the panelist from the Future of Life Institute clearly outlined how scientists and relevant subject matter experts are concerned about the risks to the reputation of new technology from autonomous weapons systems and they are not worried about any risks a ban would pose to dual use technology. Protocol 4 of the CCW and the Chemical Weapons Convention has shown us that weapons can be prohibited without risking the development of beneficial technology.

As we heard at a side event in April, the financial community makes its decisions based on risk, if an investment is too risky, you don’t do it even if the potential for a big payoff is there. We are constantly surprised that after hearing so many expert assessments that this technology poses high risks to civilian populations, some states are still object to development new IHL to prohibit AWS because maybe there will be tangential benefits from the technology.

It’s one thing to risk money, it’s another completely to risk other people’s lives.

High contracting parties should make the responsible choice in the face of overwhelming risk and start negotiating new international law to create a new treaty to ban fully autonomous weapons.

What’s Gender Got to Do With It?

Mines Action Canada, Project Ploughshares, the Women’s International League for Peace and Freedom, the International Committee for Robot Arms Control with the Government of Canada are hosting a briefing event during the Convention on Certain Conventional Weapons Group of Governmental Experts Meeting in Geneva. The lunch time event will be held on Thursday August 30 and for more details please see the flyer.

Autonomous Weapons and the Future of Warfare

The discussion about autonomous weapons is coming to Ottawa!

Join us on August 16th to hear from national experts about the future of warfare and Canada’s role.